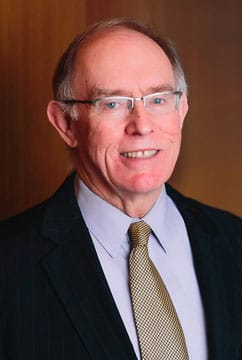 James W. Ryan is a Partner with Pannone Lopes Devereaux & O’Gara LLC and a member of the firm’s Criminal Defense, Health Care and Litigation Teams. Mr. Ryan is a highly successful trial lawyer representing clients at the state and federal level. He has significant experience in defending white-collar crime and fraud issues, complex commercial and banking litigation, regulatory and corporate compliance matters and governmental investigations. Attorney Ryan is a prominent member of the legal community, and was honored by his peers and judges with the AV Preeminent rating from Martindale Hubbell which is the highest rating based on both legal ability and ethics. He has also been recognized as a White Collar Crime Super Lawyer®. Mr. Ryan also has substantial experience in representing students in school disciplinary proceedings and property taxpayers at municipal tax valuation hearings.

In 1987, Mr. Ryan was appointed Chief of the Criminal Division for the Rhode Island Department of Attorney General. For more than nine years, Attorney Ryan successfully lead the prosecution of all felony cases, including fraudulent transactions involving misuse of government funds and corrupt practices. Mr. Ryan personally prosecuted the bank officials and others responsible for the collapse of the Jefferson Loan & Investment Bank.

Earlier in his career, Attorney Ryan worked in the Manhattan District Attorney’s Office as an Assistant District Attorney where he was appointed Senior Trial Counsel and Bureau Chief in the Trial Division by District Attorney Robert M. Morgenthau. Prior to his practice with PLDO, Mr. Ryan was a litigation partner with one of largest law firms in Southeastern New England.

Mr. Ryan has held several high profile community and volunteer positions in Rhode Island including serving as a member of the Governor’s Economic Crime Commission, the Teitz Commission on the Future of the Courts and as a board member for the Cornerstone Adult Services, Inc. and Bike Newport.

Attorney Ryan earned his J.D. from Fordham University of Law and a Bachelor of Arts from the College of the Holy Cross. He is admitted to practice law in Rhode Island, Massachusetts and New York, and is also admitted to practice before the U.S. District Court in MA, RI, SDNY, EDNY; U.S. Court of Appeals, 1st Circuit and 2nd Circuit.