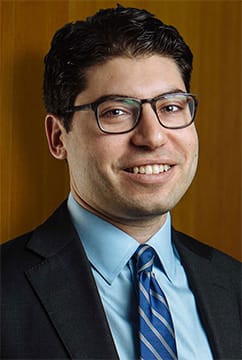 Joshua J. Butera is an Associate with Pannone Lopes Devereaux & O’Gara LLC and a member of the Corporate & Business Law and Municipal Law Teams. He concentrates his practice assisting clients in the areas of corporate compliance, administrative and regulatory law, policy and contract law and other general private and public sector issues. He is a skilled legal researcher and writer and has assisted in the representation of individuals, private organizations and public agencies on numerous legal matters before state and federal courts. He also provides business advice to corporate clients and negotiates complex transactions.

Attorney Butera is a former Special Counsel in the Office of Governor Gina Raimondo, where he conducted legal research and analysis on a wide range of legislative issues and public policies. He drafted briefs before the Rhode Island Supreme Court and Superior Court and prepared FOIA responses and other memoranda. In this position, he also advised senior staff on legal matters and policies related to the Rhode Island Department of Transportation, the Rhode Island Public Transit Authority and the Rhode Island Airport Corporation. Prior to his public service for the State of Rhode Island, he worked in the litigation department of an international law firm representing clients in numerous areas of the law including contract law, the Fair Housing Act and the False Claims Act. He also represented pro bono clients regarding landlord/tenant disputes, asylum cases and the Individuals with Disabilities Education Act.