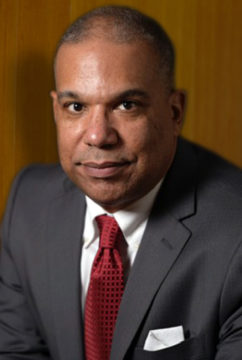 William J. Trezvant is a Senior Counsel with Pannone Lopes Devereaux & O’Gara LLC and a member of the firm’s Alternative Dispute Resolution and Special Masterships Teams. He focuses his practice working with the PLDO Special Mastership Team in Prison Monitoring for the U.S. District Court, Eastern District of California, responsible for monitoring prison reform compliance and progress in the implementation of mandatory mental health screening, diagnosis and treatment of prisoners throughout the California prison system.

Attorney Trezvant is a prominent member of the legal community and a former Special Assistant in the Office of the Rhode Island Attorney General, where he worked for nearly two decades as a criminal prosecutor on cases ranging from misdemeanors to high profile felonies. His prior experience includes managing the Trezvant Law Group LLC and working as a Budget Analyst for the Rhode Island Department of Administration and for the Governor’s Rhode Island Commission on Police and Community Relations, where he wrote an advisor opinion for the Commission on the use of deadly force by police. Earlier in his career, he was the Assistant Counsel for Foxwoods Resort and Casino in Connecticut, where he negotiated and drafted construction, management and entertainment contracts and was the Casino’s liaison to various federal, state and local government law enforcement and administrative agencies.

In addition to his legal practice, Attorney Trezvant is an active community volunteer and has served on various state and nonprofit boards, including as a member of the Board of Directors of Rhode Island Legal Services Inc. and Boy Scouts of America/Narragansett Council, as President of the Thurgood Marshall Law Society, and as a member of the NAACP and National Eagle Scout Association.

He earned his J.D. from the College of William & Mary, Marshall-Wythe School of Law and B.S. in Accounting from the University of Rhode Island. He is admitted to practice in Connecticut and Rhode Island and the United States District Court of Rhode Island.